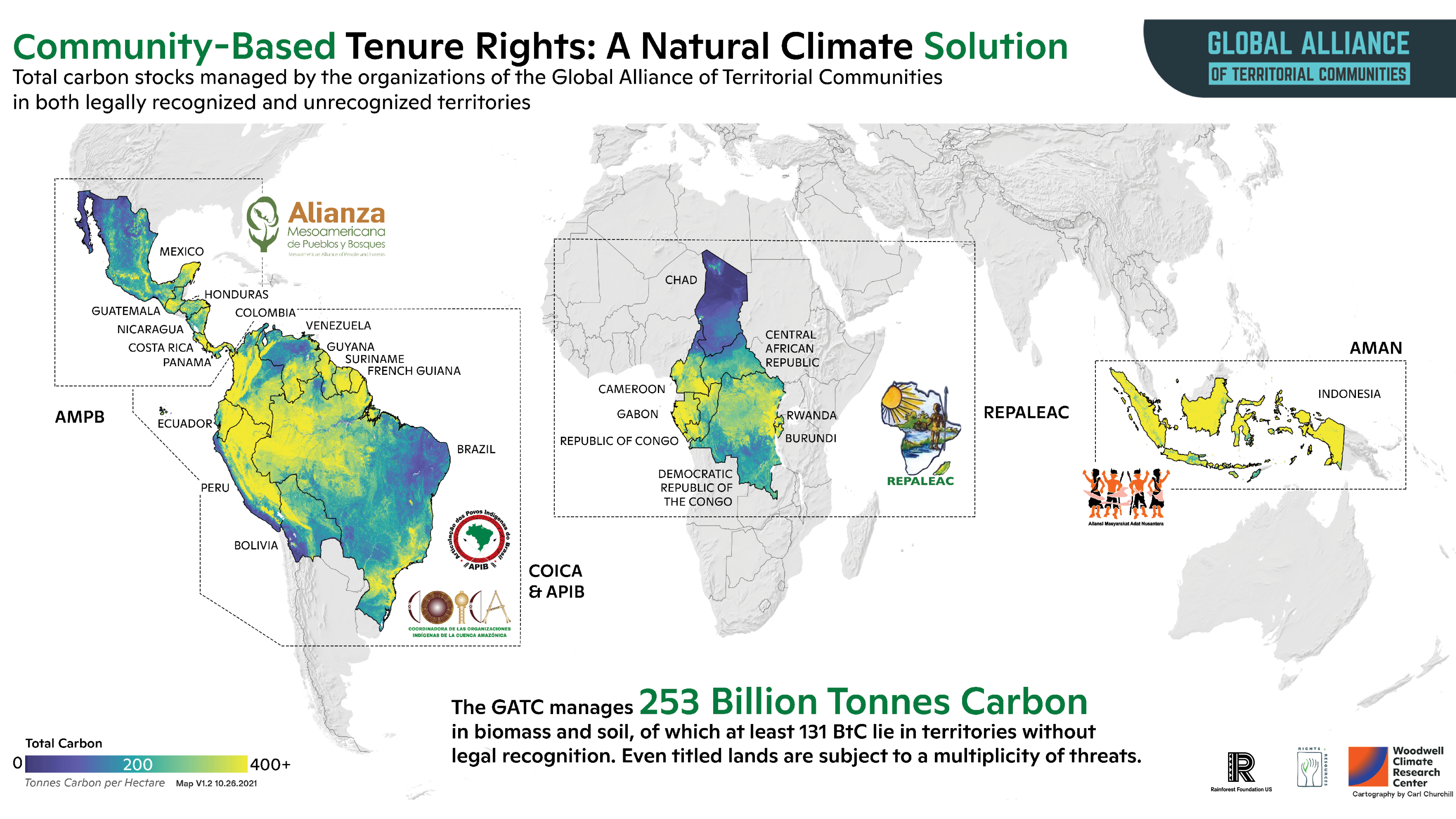 At UNFCCC COP 26, New Research Shows Indigenous Peoples and local Communities hold at least 958 million hectares of land spanning most of the world’s endangered tropical forests – yet have legal rights to less than half of their lands.

Community-held lands sequester over 250 billion metric tonnes of carbon, and lack of secure rights threatens release of much of this carbon into the atmosphere through deforestation.

GLASGOW (6 November 2021)—In new research released at the UNFCC COP, scientists mapped out 958 million hectares (mha) of Indigenous and community territories as containing over 250 billion metric tonnes of carbon. However, these communities only have legally recognized rights to less than half of this area (447 mha), jeopardizing the landscapes they protect as well as the 130 billion metric tonnes of carbon contained therein.

These landscapes are held and managed by Indigenous Peoples (IPs), Afro-descendant Peoples (ADPs), and local communities (LCs) in 24 of the world’s most forested countries and 60% of the planet’s tropical forest area. Failure to recognize their rights exposes them, their territories, and the carbon and biodiversity they hold to increasing threats of deforestation and degradation, potentially accelerating emissions from a carbon pool equivalent 15 times the world’s 2020 energy-related Co2 emissions.

The research, produced by the Rights and Resources Initiative (RRI), Woodwell Climate Research Center and the Rainforest Foundation US, focused on the Global Alliance of Territorial Communities (GATC) – an alliance of traditional communities in the 24 countries* which by their common interests and sheer terrestrial footprint, embody the importance of IPs, LCs, and ADPs across the world.

“This data shows what scientists have been saying for years: Indigenous Peoples and local communities must be co-authors, not just participants, in climate and biodiversity solutions,” said Tuntiak Katan, Indigenous Shuar of Ecuador and General Coordinator of the GATC. “We offer the most effective, sustainable and equitable solution to halting deforestation and preserving and restoring the functions served by our ecosystems. Unless you recognize our role in keeping rainforests intact and our rights to self-determination, you can’t count on those trees staying upright.”

Research shows that less than 1 percent of official development assistance for climate change mitigation and adaptation has gone toward recognition of community forest tenure rights and management projects. Of that, just 17 percent went to Indigenous or community organizations for implementation – with the rest channeled to large intermediary organizations. GATC leaders and their allies assert that business as usual can no longer go on – on November 1, they announced the “Shandia Vision,” a re-imagining of the financial architecture of global climate finance to create new mechanisms to channel scaled, direct funding to IPs and LCs to secure their rights and effectively govern their territories.

“The Shandia Vision represents the rights holders’ vision for the future and is rooted in the common goals of GATC members to secure their territories for cultural survival, defend collective rights and defend the rights of nature,” said GATC member Joseph Itongwa Mukumo, an Indigenous leader from the Walikale Forest Area in the Democratic Republic of Congo (DRC) and coordinator of REPALEAC, a network of Indigenous and local communities for the sustainable management of forest ecosystems in Central Africa.

“Shandia Vision is envisioned as a system built by local peoples for the people –and to guide financial mechanisms that fund community efforts to mitigate the climate crisis, conserve biodiversity, restore degraded landscapes, and advance local economies,” he said.

Gustavo Sánchez Valle, President of the Mexican Network of Forest Peasant Organizations (Mocaf) and Executive Commission Member of the Mesoamerican Alliance of Peoples and Forests said, “Such financing mechanisms must support and complement an emerging set of regional and national funds led by Indigenous and local community rightsholders across the world.” Sanchez, who serves on the RRI Board, leads one such effort – the Mesoamerican Territorial Fund, which is dedicated to fostering investment in community-led structures for governance of Indigenous and local territories in Meso America.

Solange Bandiaky-Badji, Coordinator of RRI, said the current ecosystem of rightsholders’ organizations and their allies has already demonstrated the immense possibilities of securing land rights for achieving global climate and conservation goals. “But the present scale of funding is just inadequate to capitalize on this ecosystem. RRI is working with GATC leadership to remedy this by funneling resources to implementers on the ground; strengthening Indigenous and community rights as well as their capacity to govern, protect, and restore their lands.”

Sara Omi, GATC member, an Embera leader from Panama’s General Embera Congress of Alto Bayano and President of the Coordinator of Territorial Women Leaders of Mesoamerica said, “Indigenous women hold most of the traditional knowledge that has helped past generations to coexist with their environment. However, we are also suffering the consequences of climate change, which affects our right to survive and protect our ancestral lands. If you do not invest in our economies and our conservation methods, this crisis will continue to escalate and disproportionately affect the most vulnerable.”

As powerful actors jump into the global carbon market to compensate for emissions made elsewhere, doing so without first securing communities’ territorial rights and investing in their traditional conservation approaches brings even further risks to their ability to protect endangered landscapes. Research from RRI shows that a vast majority of tropical forested countries seeking to benefit from international carbon markets have yet to define in law and in practice the rights of local peoples over the carbon in their customary territories. This lack of clear rights poses substantive risks to both communities and investors, creating uncertainty on who will benefit from land-based emission reductions.

“You can talk about nature-based solutions, but you can’t implement them without recognizing the rights of the peoples that have been protecting and managing forests successfully on their own for generations,” said Suzanne Pelletier, executive director of Rainforest Foundation US. “Indigenous Peoples and local communities have proven experience at maintaining – and even improving – the carbon density of forest landscapes and doing so under dire and often violent pressures. If the international community wants to dedicate more funding to climate solutions, they need to work with them directly.”

In a policy brief accompanying the map, researchers advocated for five interdependent principles to guide all future climate actions and investments to empower communities to protect their lands and forests, and pursue their self-determined priorities:

“Like doctors and nurses, police and firefighters, Indigenous Peoples and Local Communities are first responders on the front lines of the fight to protect the planet’s remaining tropical forests,” concluded Wayne Walker, Carbon Program Director at the Woodwell Climate Research Center and one of the lead researchers. “Their lands deserve to be recognized and their efforts deserve to be rewarded.” 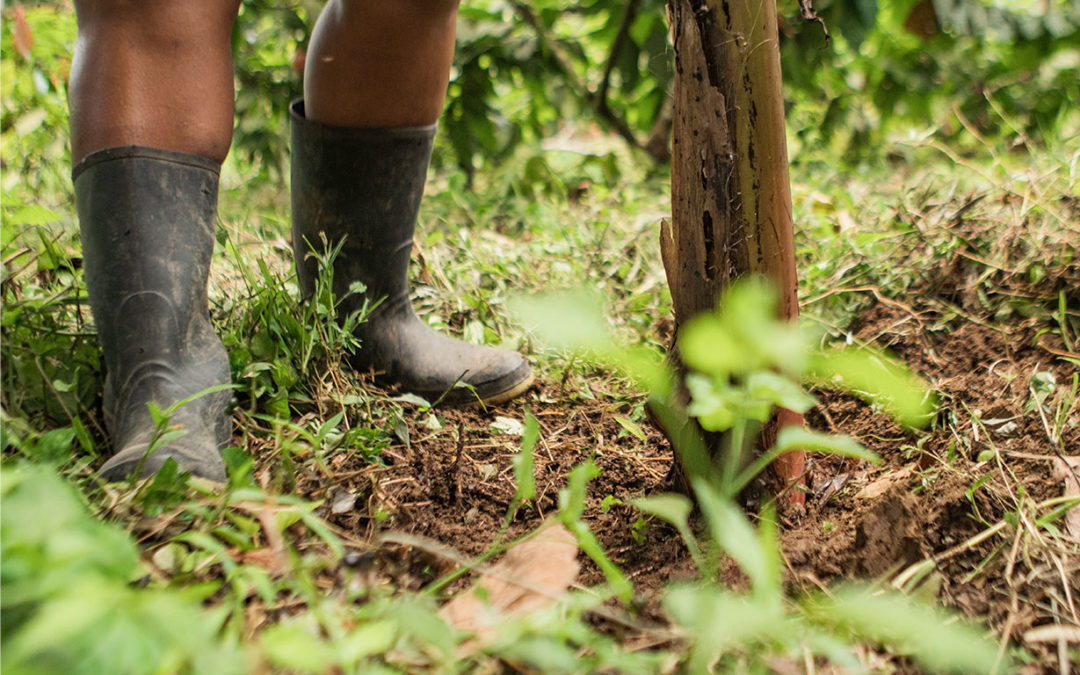 A new report from the Intergovernmental Science-Policy Platform on Biological Diversity and Ecosystem Services (IPBES) indicates that, to be successful, policies for the sustainable use of wild species must include the participation of Indigenous Peoples and local... 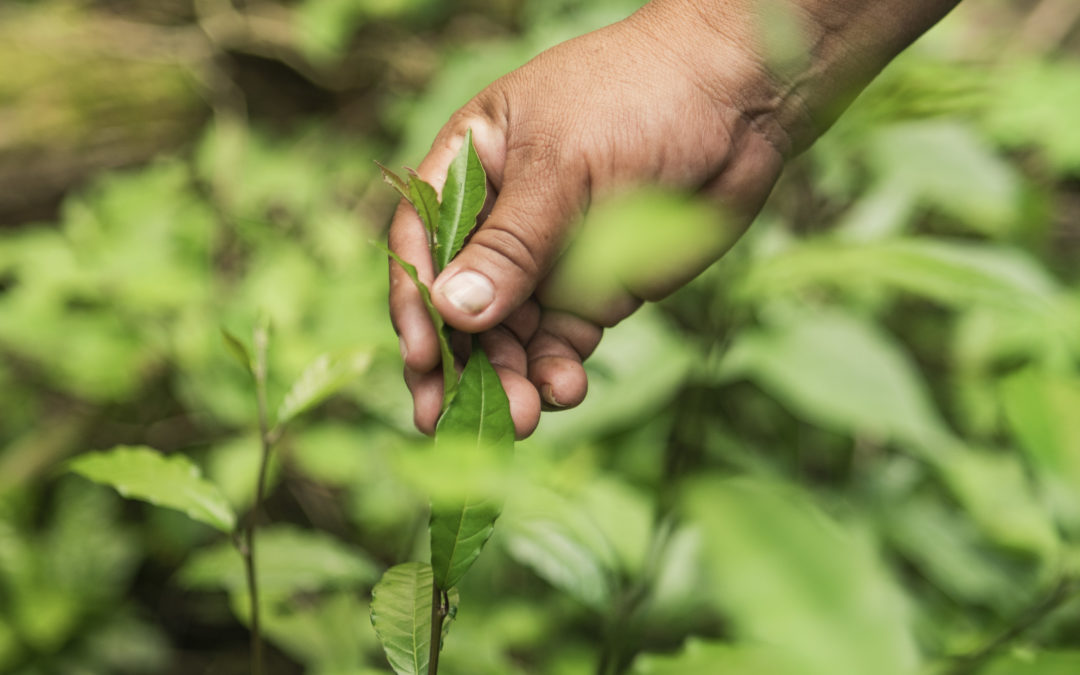 By Dina Juc - Area of Rights and Culture, Mesoamerican Alliance of Peoples and Forests Within the framework of World Environment Day, indigenous peoples remind the world, international organizations and state governments, that 80% of the planet's biodiversity is...